SHOP HOME GARDEN
Until you actually see it, it is hard to believe the claims of EM•1® having antioxidant effects.  We ran a little experiment to see what would have to metal that was in contact with EM•1® for an extended period of time.  To do the test we chose parts that would be in a well since well treatment is very common in the Southwest due to the extremely hard water.

Wells are treated yearly with acids to help them flow better.  Normally, after the growing season, a treatment will be made and left to sit for a week or longer.  The well will then be flushed and re-treated until it works without problems. 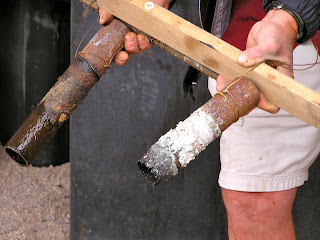 To simulate what would go on down in a well, we treated a couple buckets with an acid fertilizer with a pH of 0.5 at a 3% solution.  We did the same with an EM•1® treatment at 3% and let pipes from a well sit for one month and observed what happened to the metal.  Remember, EM•1® has a pH of 3.5, so it is acidic too! 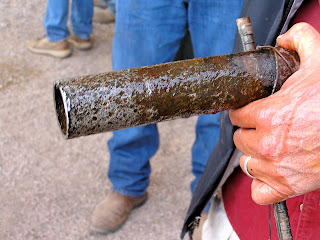 The pipe on the left does not look too impressive. This is due to a black film that coats the metal.  This is a protective coating produced by the microbes in the EM•1® that prevents the metal from oxidizing.

This photo on the right shows the pipe that was treated with EM•1® after it is washed with fresh water. 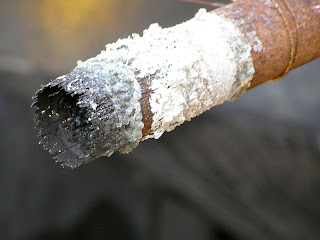 This photo on the right shows a close up of the pipe that was treated with the acid product.  You can see that there is a huge layer of salts that are on the pipe (the white stuff) and the end of the pipe has begun to rot away from the exposure to the acid.

Which would you rather have?  There will always be some residual acid in the well when treated with an acid.  Over time the pipes will completely corrode and need replacement.  We could deduce from this simple experiment that using EM•1® as a well treatment would not only remove the rust, but also protect equipment, dramatically extending its lifespan.