While most people associate pests and bacterial problems with traditional crops and farm animals, these things can also be a threat to the aquaculture found in aquariums, ponds, large reservoirs and virtually anywhere else where a living marine population is maintained. The effects of harmful bacteria can be especially hard to control without the right tools and microbial solutions. For those in the private and commercial industries, Activated EM1 presents an effective way of controlling things like microbial infestations, dangerous sludge that can deplete the pond of oxygen, and ailments that can harm commercial production. Best of all, EM-1 is a highly scalable solution, able to treat large and small environments based on concentration and distribution.

Promoting the Health of Fish and Ponds

Perhaps the most common use for the EM-1 Microbial Inoculant is treating ponds where a community of fish is currently living. When these ponds are left to their own devices, they can often become consumed by bacterial infestations and other problems that can result in dark water, sludge, and health hazards to the fish themselves. This can often severely shorten the lifespan of the fish by lowering their dissolved oxygen levels, and reduce the quality of their life in the water. This outcome can be avoided, though, by adding EM-1 to ponds in order to protect aquatic life and actually enhance the health of the marine life – both plant and animal - in the pond.

Laboratory tests show that EM-1 is also an effective at clearing away the lignin, carbohydrates, cellulose and other starches, that can make up the sludge found in some ponds. A monthly treatment of the water will reduce this sludge over time and, after a few months; it will simply be gone altogether. Best of all, the scalable nature of the EM-1 treatment means that it works in ponds as small as 5,000 gallons and those that range in size up to billions of gallons of water, making it entirely useful in private and commercial aquaculture. EM-1 is very beneficial to fish growing. It is estimated that 70% of the shrimp produced in Thailand are now grown with EM-1. It has been used to clean many famous water bodies in the world, including the Bogota River in Colombia South

America, Lake Titicaca in Peru and in the Seto Inland Sea in Japan.

During treatment, it's likely that the sludge itself will become a bit more buoyant, floating to the top of the pond and resting atop the water. While it's tempting to remove this sludge, it's actually important to leave it in the water so that EM-1 can work its magic and let nature take its course. With an all-natural treatment for this common problem, fish will greatly benefit as their water is clearer, healthier, and more conducive to longer lifespans overall.

For Commercial Industries, A Defense Against Disease 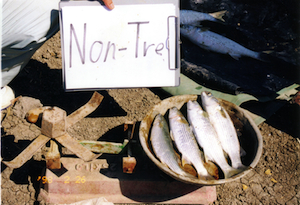 One of the most common problems to plague the commercial fishing industry is that fish kept in commercial ponds are often subject to overcrowding as the company pushes to maximize their output. Unfortunately, overcrowding without the proper environmental controls can lead to major health problems in fish, shortening their lifespan and exposing them to a greater likelihood of disease and death. This is largely due to the increase in ammonium nitrogen found in overcrowded aquatic environments. 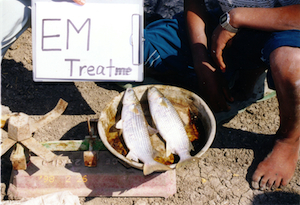 EM-1 Microbial Inoculant serves as a way to counter the excess of ammonium nitrogen. The solution can be added to a pond or other environment of any size, and it will help to inoculate fish against many diseases while enhancing the water and removing harmful bacteria. That means lower overhead for businesses and a better commitment to healthy, sustainable output.

The use of EM-1 in both private and commercial capacities should always be considered a good thing. Healthier water, healthier fish, and a cleaner environment, are often the common goals of both private individuals and their corporate counterparts. EM-1 is the best way to meet these needs in a natural, sustainable way.