SHOP HOME GARDEN
It is amazing to drive by a large feed lot or a dairy and see a mountain of manure.  The manure is mounded up year after year, just left to mound up higher and higher.  Many of the farms in the surrounding area do not want to use the manure because of fear of increased salts.  Another reason is limitations from regulations that require a certain amount of time between using the manure and planting in it if the manure is not composted. 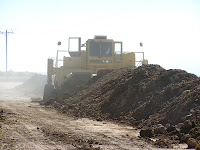 Of course, we've got a solution.  Composting on this scale requires machinery, labor and fuel.  Space is another great concern.  It requires lots of it.  TeraGanix is working with some local farms in the Southwest where organic matter in soil is usually less than 1%.  In order to get the organic matter up, one needs to apply quite a bit of material.  The growers we work with are very progressive in their growing programs and are very conscious of the fact that they need to increase organic matter to improve their crop production and decrease their input costs.  They follow a very rigid crop rotation program, have switched the much more efficient sub-surface irrigation, and practice minimum till.  These are conventional farmers, not organic farmers, and they do not use GMO crops either.

In our pictures here, the turner is being used to process about 1,500 tons of dairy manure into EM® Bokashi, a slow release fertilizer for farms in the Southwest United States. 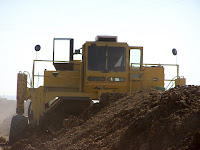 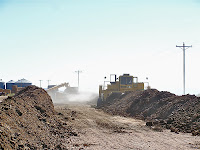 After their first applications of Activated EM•1®, these farmers were quick to notice that the normal salt rings around the water spots did not form.  Taking that into consideration, they thought about the vast amounts of manure not being put to good use that has been heaped up for years at the nearby dairies.  Add a little Activated EM•1® and you've got a great source of organic matter without the worry of salts.  After a couple trials, they decided to get a real turner and starting prepping up thousands of tons of material.  Since we're using EM•1® in the piles, the material will be ready in only 4 weeks with only one turn.  All the NH3 will be converted to NH4 (ammonium), a slow release fertilizer that will not burn plants or have any foul odors.  The pathogens will also be controlled, as have been tested multiple times.  Fields that are in the rotation will have up to 10 tons of material per acre applied.